(February 13, 2011) --- The Vince Lombardi Trophy is happy to be back home. Make that, extremely happy.
"Let me tell you, the last 12-months in New Orleans were a nightmare," said the Lombardi Trophy. "It’ll take me months to shake that stench... and you know what else? I think I put on 10-pounds."
Sure, representing the best of the best in professional football is a huge responsibility and at times has its benefits, but occasionally it just plain sucks. “I swear,” said the Lombardi Trophy, “If I hear ‘Who dat!’ one more time, I’m seriously gonna cut somebody.”
Following a 12-month assignment in New Orleans, the seven-pound, sterling silver ambassador to the National Football League is back in Titletown, USA thanks to a 31-25 Green Bay Packers victory over the Pittsburgh Steelers in Super Bowl XLV last Sunday. “It’s so good to be home,” he said as a tear rolled down its shiny 22-inch frame. Then, suddenly, a smile appeared. “The first thing on my ‘to-do’ list; get a butter-burger from Krolls!”
It’s no wonder the league’s most sought-after prize holds Wisconsin close to his heart. The Vince Lombardi Trophy was born there on January 15, 1967 and spent the first two-years of his life growing up in Green Bay with his namesake; legendary Packers coach Vincent Thomas Lombardi, Sr.
Then, just three-days before his 2nd birthday, little Vince was taken from the relative laidback quiet of his birthplace of Wisconsin and relocated to the hustle and bustle of New York City. "Although I was homesick, I must admit that New York in 1969 was an experience I'll never forget. I froze my silver ass off during the Blizzard of '69, got naked with the cast of “Hair” on Broadway, and even partied backstage with Hendrix at Woodstock. It was definitely a groovy time!”
The Lombardi Trophy is fully aware his obligations are to the NFL’s winning team and that he must be prepared to relocate at the end of every season, so he says he tries not to get too attached to any particular city. And although his career takes him coast-to-coast and he gets to see much of the country, he said it can still be a bit difficult being so far away from home. “Don’t tell anyone... but no matter where I've had to live, I’ve always considered myself a Cheesehead at heart.”
During the 70’s the Lombardi Trophy took residence in Kansas City (“soooo bored”), Baltimore (“held-up five-times”), Pittsburgh (“too many mullets”) and Miami (“those two years were a complete blur”).
Then -- while it seemed as though most of the 80’s were spent exploring San Francisco and DC -- Little Vince said the decade was completely tarnished by twelve torturous months held hostage by the Bears in 1986. “Those perverts did things to me that have scarred me for life. And try as I might, I still can’t totally erase that image of Ditka’s naked body from my brain. Yikes!” 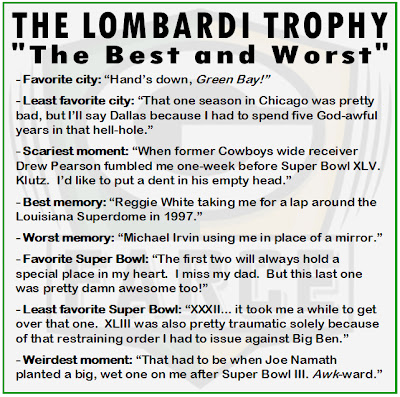 And although the Lombardi Trophy has been to the Upper Midwest several times, oddly enough, he said he’s never been to Minnesota. “I’m just a little bit curious... are Vikings fans really that whiney?”
So, what’s next for the Lombardi Trophy? Well, no one knows for sure, not even the Trophy itself. But after four decades of living out of apartments and hotel rooms, for the first time he’s looking into buying a home in Green Bay. “I have a feeling,” said the Lombardi Trophy, “I’m gonna be here for a while.”
In related news... the PackerPage has recently discovered that just minutes after singer Christina Aguilera messed-up the lyrics in front of a record 111-million Super Bowl XLV viewers, she begged officials for, "another chance to sing the 'The Star Spangled Poster Song'.”
Posted by The PackerPage at 5:30 PM