(January 30, 2011) --- Remember Paul the Psychic Octopus who correctly called the winners of last summer's World Cup? Well, just months after Paul went eight-legs-up last October, the city of Chicago unveiled their own water-bound prognosticator... a slippery sea critter named Ty the Sea Lion.
In a lame attempt to promote Chicago’s Shedd Aquarium, Ty’s trainer staged a publicity stunt last week where he claimed his seal could predict the winner of the Bears-Packers NFC title clash at Chicago’s Soldier Field. Long story short... he couldn't. But then again, what do you expect from an animal that wears a Ditka moustache?
Sure, it sounds like it was all fun and games... but after hundreds of gullible Illinois football fans lost their cars, savings and double-wides by taking a seal's advice and betting everything they had on the Chicago Bears, something had to be done to protect the stupid.
To expose phony forecasters such as Ty, the Federal Gaming Commission (FGC) has taken serious steps to warn potential football gamblers to stay away from seals ("picks are always a bit too fishy") and octopi ("often can not pick just one winner").  Instead, the FGC has endorsed one of God’s more beautiful, intelligent and reliable creatures... and one with a huge rack, no less.
Introducing Wisconsin Dells resident, Bernie the Buck... the only deer sanctioned by the FGC and the only animal hornier than Ben Roethlisberger.
Not only has Bernie the Buck correctly predicted the winner of each of the last six Super Bowl games, but he also does something no other prognosticating four-legged hoofed mammal has ever done. You see, Bernie is special because he not only knows who will win the big game but he uses his head to accurately calculate the final score too.
For instance, last year Bernie the Buck appeared out of the wild just a week before Super Bowl XLIV carrying a spectacular 48-point antler-rack with 31 of those points leaning toward the underdog New Orleans Saints. And he was... (um, sorry Bernie...) “right on target!”
So, which NFL team does the big buck say we should put our doe on this year?
Yesterday, right on schedule, Bernie the Buck emerged from the woods outside the Dells sporting a 17-point rack with most of his antlers weighted to his left indicating the home team, Green Bay. When zoologists carefully examined Bernie, they came to the conclusion that this year’s Super Bowl will be a defensive barn-burner.  They counted 10 points on the Packers side of Bernie's rack and just 7 points on the Steelers side meaning Green Bay will win its fourth Super Bowl on February 6th.  And if you don't believe it, Bernie says, "Buck you!"
Incidentally, just before Bernie disappeared back into the Wisconsin wilderness, he paused for a moment and left a little gift behind for Steelers fans.
Posted by The PackerPage at 8:08 AM

(January 25, 2011) --- With a squad that lead the NFL with the most starters on injured reserve, a team that stumbled into December with a mediocre 8-and-6 record, and a quarterback who once sported a 70’s styled porn-star mustache... the Green Bay Packers have overcome major adversity to win their fifth straight elimination game and earn a place in Super Bowl XLV.
Packers quarterback Aaron Rodgers looked brilliant in the opening drive of the NFC Championship game, marching his squad across the beautifully painted dirt at Soldier Field for the Packers first score.
Sure, the Packers beat the Bears 21-14 last Sunday to advance to the Super Bowl, but somehow Green Bay’s achievement was lost amid a huge Jay Cutler media backlash. Bears fans wanted to know why their QB suddenly went AWOL, lost his balls, threw-in the towel, wussied out, hung it up... manned-down.  Was this Cutler's last stand?
In a post-game press conference, Cutler told the media he thinks that "something might have happened somewhere on his body sometime in the 2nd quarter" and decided it would be better for his team if he just sat-out the rest of the game on the sideline bench and pouted. As sports reporters found out later, apparently Cutler's diaper-rash was far worse than his physicians had at first realized.
With Cutler out, Bears coach Lovie Smith put in their back-up quarterback... and then the back-up to the back-up. Then... with their back up against the wall, Mr. Hanie at the helm in the 4th, and a reputation that’s mostly based on luck... the Bears managed to pull within 7-points. But with less than two-minutes left in regulation, Green Bay hunter Sam Shields bagged another bothersome Bear by picking off his second of the day and thus brought the bacon home for the Packers.
Upset that their team lost such an important game to their arch-rivals, Chicago police were said to have responded to several reports of angry Bears fans taking out their aggressions outside Soldier Field.

• Several disgruntled Chicago ticket holders gathered to protest their quarterback by burning their Jay Cutler jerseys. A fire department spokesperson said that injuries might have been prevented if they would have taken them off first.
• Dozens of crazed and riotous Chicagoans found themselves stuck in the stadium parking lot for several hours after realizing they inadvertently tipped over their own cars.
• And actor Jim Belushi was so pissed-off that he kidnapped a group of Packers fans and forced them to watch an entire season of "According to Jim." Sadly, there were no survivors.

Despite widespread criticism, several head coaches have stepped-up in support of Jay during this controversy and want him to be with a team where he feels the most comfortable. In fact, the PackerPage has recently discovered that Cutler is planning on cutting his ties with the Bears and is seriously entertaining an offer to become the starting quarterback with the San Diego Seduction.
Posted by The PackerPage at 5:11 AM 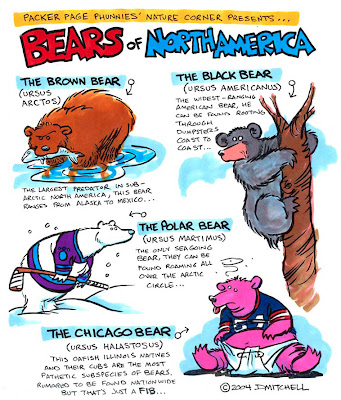 Posted by The PackerPage at 4:09 PM

IT'S A BEAR AFFAIR

(January 21, 2011) --- Roman Pyszmowski can’t wait to get to Soldier Field for this Sunday’s NFL Championship game between the Green Bay Packers and his Chicago Bears so he can watch his favorite player.
Pyszmowski, a 47-year-old resident of Chicago, claims to be the biggest Brian Urlacher fan in the Windy City and is the owner of the most comprehensive collection of Urlacher memorabilia in the entire state of Illinois. "I love my-man Brian! And I appreciate everything he’s done for da-Bearszzzz."
Roman said he first became a fan in 2001 when Urlacher appeared at Pyszmowski's trial at the Cook County Courthouse to testify on behalf of Bear's teammate Kordell Stewart’s stalking case. "Brian's a famous football player, but he still found time in his busy schedule to show up in person to testify against me. You could say I was just a little bit more than star-struck and I've been a devoted Urlacher fanatic ever since!"
Aside from the thousands of personal photographs of Urlacher that line the walls of his home (Brian playing football, Brain signing autographs, Brian eating dinner, Brian driving his car, Brian trying on ladies undergarments, etc.), Pyszmowski is also proud of his "Urlacher Locker..." a giant trunk full of souvenirs, keepsakes and collectables having to do with his favorite Bears linebacker.
In his trunk you’ll find hats, helmets, jerseys, t-shirts, programs, bobble-heads, boxer shorts, nose hairs, toe nail clippings, belly-button lint, a half-eaten salami sandwich, dental floss... all once belonging to Urlacher.
“My latest acquisition is the actual Gillette Mach 3 razor blade cartridge Brian used to shave his head prior to the game in which the NFL fined him $10,000 for that awesome helmet-to-helmet hit to Minnesota’s Visanthe Shiancoe last month. I can’t believe he just threw it away.”
Roman also brags that he’s the king of Urlacher trivia and can rattle off endless info on the bald-headed Bear boy all day. “His birthday is May 25th... he has a barb-wire tattoo on his right arm... his AOL chat name is ‘clayaikenfan’...”
Pyszmowski said he always shows up at each and every Chicago game at Soldier Field wearing his extra-extra-large Bears jersey. But he added, "I’m always shirtless during the game so hopefully Brian can see the humungous Urlacher tattoo I got last year. But because it’s on my back, I always seem to miss a lot of the action on the field."
Although Pyszmowski seems to know everything about Brian Urlacher, Urlacher says he doesn’t know who the hell Pyszmowski is. "Pyszmowski? Never heard of the dude," said Urlacher. But when a reporter said the guy was a huge fan, Urlacher said, "Oh, well that’s different. Whatever. Have him e-mail the Bears and we’ll send him an 8x10 picture of me signed by my secretary. He’ll need to cover the postage, though."
In related news, TMZ reported that Jay Cutler became quite emotional after discovering he was recently dumped by “Tom,” his last remaining friend on MySpace.
Posted by The PackerPage at 4:43 PM

Posted by The PackerPage at 6:15 PM

THE BESTEST PACKERPAGE STORIES OF 2010

(January 6, 2011) --- Like any year, 2010 had its share of memorable sports moments... but it sure seemed as though a lot of them revolved around the foibles of one Brett Favre. In fact, we could have easily given all ten slots of this best-of list to that ambivalent grey-haired sexting interception-throwing hillbilly traitor, but we instead decided to spread the spoof around just a bit. From digging up Packer season ticket holders to well-endowed football schedules, here is a look back at the top-10 PackerPage sports stories of the past year as decided by you.*
10. VIKINGS FRANCHISE TO MOVE FROM LAND OF 10,000 LAKES TO LAND OF 10,000 FLAKES
Zygi to move his team to a city that’s a perfect fit for the Vikings.

9. PACKERS ARE PUMPED UP AND TWO TIRED
Recession forces team to find alternate ways of getting around.

8. BRETT FAVRE RETIRES AGAIN... NOW WHAT?
A look at what the future holds for #4.

7. DE NIRO TO PLAY THE GODFATHER OF ALL MOVIE ROLES
Veteran actor gets to shout those poetic words; “What the hell’s going on out there?!”

4. COMING OUT OF THE CLOSET
NFL goes back, way back, for the Packers-Bears game.

3. GOODELL PUBLICLY ADMITS: "I WISH IT WERE LONGER"
The NFL commissioner shows off his much bigger package.

1. DUST TO DUST, ASHES TO ASHWAUBENON
Packer Backers already know that Lambeau Field season tickets are to die for.