THE TWELVE BAYS OF CHRISTMAS

(December 18, 2010) --- Like most of us, we’re all dreaming of a Green & Gold Christmas! But have you picked out a present for that hard-to-buy-for Packer Backer on your “nice list” this season? Well, with the holidays just around the corner, the PackerPage continues its series on Green Bay gift giving while taking you through the “12 Days of Christmas” with a unique gift idea each and every day leading up to December 25th.
On the Seventh Day of Christmas... 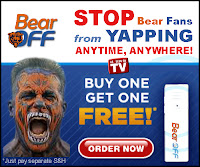 Don’t you wish there was a way to train that obnoxious Chicago Bears fan to shut-the-hell-up! Packers fans really do try to put up with those Windy City Whiners... there’s no question about that. But sometimes their incessant yakking just gets to be a bit too much.
That’s why every Packers fan should own Bear-Off... the only Bear-fan repellent approved by both the NFL and the ASPCA (American Society for the Prevention of Cruelty to A-Holes).
﻿﻿﻿
﻿

Unlike sticks and stones, Bear-Off uses a frequency that humans cannot hear, but dogs and FIB’s can! With a simple push of a button, near-by unbearable Bears fans will snap to attention and immediately stop their annoying yapping.
After some conditioning, by continual use, you’ll teach that dude with the Ditka ‘stash in a Bears sweater-vest to break that jibber-jabbering habit once and for all.
Bear-Off is a small and compact wireless device that can be taken with you on those dreaded trips through Illinois, to games when Chicago plays at Lambeau Field, or while watching an NFL broadcast at your neighborhood sports bar. It's a handy little gadget that is guaranteed to quiet that dog-of-a-Bears fan faster than you can say “The Bears still suck!” Not only does Bear-Off make a terrific stocking-stuffer this Christmas, but it'll also help bring Packers fans one step closer to peace on Earth.
Tomorrow for “The Sixth Day of Christmas,” the PackerPage brings you a holiday hint for that Packers fan who is stuck in the 80’s. We’ll let you know where you can pick-up an authentic Lynn Dickey dickey... a mock turtleneck which gives you a fashionable look of layering without the bulk or extra body warmth while at the same time honoring that curly-haired Hall-of-Fame Packer QB from Kansas.
Posted by The PackerPage at 3:17 AM