PACKERS ARE PUMPED UP AND TWO TIRED

(September 6, 2010) --- Although the Green Bay Packers remain a profitable team, they’re just not bringing in the green and gold for the Green & Gold as much as they used to.
Team officials announced that the Green Bay Packers posted an operating profit of $9.8 million in the fiscal year that ended last March, down from $20.1 million the previous year. According to Packers president and CEO Mark Murphy, the drop in profits has been attributed primarily on escalating player costs. “And to get us back solidly in the black, a few cost-cutting/money making measures had to be taken...  other than once again jacking up the price of your Miller Lite at Lambeau." 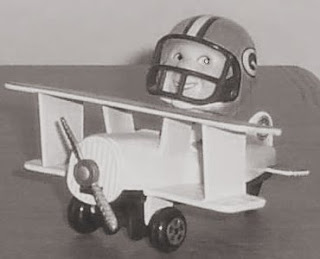 The Packers were the first team in the league to fly to away games when they pioneered the practice in 1940. Here’s a nice vintage photo of Packers tailback Cecil Isbell smiling as he departs Green Bay for a game in New York against the Giants. Leave it to the Packers to once again break new ground and lead the way in the NFL in transportation.
Beginning this week, the Packers squad will be saving the publicly-owned NFL franchise a crap-load of cash by having everyone on the team peddle to all of their away games this year. And by riding bicycles instead of boarding a jet, the team will be conveying a valuable environmental example to fans and other teams as well.
“Transportation costs eat up a big chunk of our budget,” said Murphy. “So we decided to leave the DC-3 on the runway this season and look at other forms of transportation.” 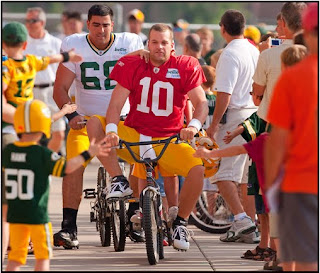 Due to the economy and the price of fuel, the Packers have become the first team in the NFL to go all “Lance Armstrong.” Here’s a nice picture of fans outside of Lambeau Field wishing Matt Flynn “Good luck against the Eagles” as he begins his 940 mile bicycle trek to Lincoln Financial Field in Philadelphia.
The idea stemmed from training camp and a tradition that has been in place since 1957 when young Packers fans have their favorite players ride their bikes to the practice field from the locker room.
“We just thought we’d take it a step further,” said Murphy. “And to additionally cut costs during these hard economic times, we’re giving the players the option to either supply their own bicycle or borrow one from one of the kids waiting outside Lambeau.” 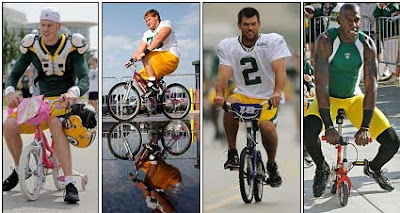 Philadelphia or Bust! Packers’ punter Tim Masthay, tackle T.J. Lang, kicker Mason Crosby and wide receiver Donald Driver know that it’s not about where you’re going, it’s how you get there.
Even Packers’ Strength & Conditioning Coordinator Mark Lovat embraced the idea from the start. “In the past, we used to have them on the stationary bicycles several times a week. Sure, you’re toning up muscle... but you’re not going anywhere! Getting the entire team to pedal to-and-from all away games will provide true aerobic exercise for everyone on the squad. It’s a Schwinn-Schwinn situation.”
The Green Bay Packers mounted their bikes and departed this morning for their first regular season away-game against the Eagles this Sunday. According to Packers administration coordinator Matt Klein, the team will make several stops along the way to Philadelphia for food and lodging. “That includes a planned potty stop in Chicago so everyone can piss on Soldier Field.”

Just about everyone from the Packers’ front office will be joining the team and peddling to Green Bay’s first game in Pennsylvania this week... everyone, that is, except for the team’s senior financial account manager Traci Nygaard who can’t ride a bike any more. Apparently she lost her balance.
Posted by The PackerPage at 12:35 PM