THE GRASS REALLY IS GREENER ON THE OTHER SIDE

(September 22, 2010) --- Last February the Minnesota Vikings were just one-win away from blowing their fifth Super Bowl. But right now it looks as though the people in purple are worried they’ll spend the rest of the 2010 football season sniffing Lion butt. And that's not sitting well in Minnesota. 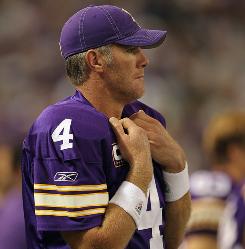 Here's a nice picture of Vikings' quarterback Brett Favre sensing an oncoming choking feeling. Regardless, Favre is proud of the fact that he was able to effectively spread the ball out to a number of different receivers last week, even if they happen to play for the opposing team.
The state is best known for its 10,000 Lakes, grumpy old men, and the largest percentage of NFL bandwagon fans in the country. That wagon was filled past capacity when Brett Favre took the Twin Cities team to the playoffs last year, but after losing their second straight game last Sunday, local support for the Vikings dropped faster than hooker's knickers on Hennepin Avenue on a Saturday night. In fact it's gotten so bad the city fathers have stepped in to quell the panic, impede citizens from defecting, and prevent a possible statewide economic meltdown.
Immediately following the team's embarrassing 10-14 home loss to the Miami Dolphins last weekend, Minnesota Governor Tim Pawlenty mobilized the National Guard in an attempt to keep fans from jumping off of the Vikings bandwagon. In a government move reminiscent of FDR's temporary bank shut-down to stall financial panic during the Great Depression, Pawlenty ordered all sporting good and department stores in the state to close their doors until further notice to prevent panicked "fans" from returning their recently purchased Favre and Adrian Peterson jerseys. Pawlenty feared refunds on a massive scale could make the recession in the state worse than it already is. "This is only a temporary measure," announced the governor. "The 'Sports Store Holiday' will only stay in effect until the Vikings move above the .500 mark... or until the Twins are deep into the playoffs, which ever comes first. And remember; the only thing we have to fear is, fear itself... and Favre's arm." 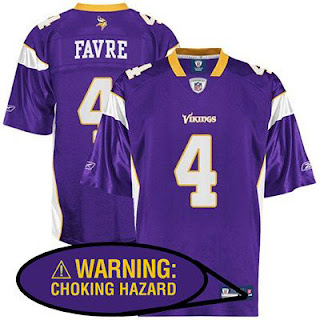 Why do the Minnesota Vikings have purple uniforms? Team historians say they wanted a color that would best match their faces whenever they started to choke.
The Vikings now find themselves at 0-2, and panic is already beginning to set in. That's because Vikings fans understand the cold, hard facts:

-Over the past 20-years, only 13-percent of teams that start off with two-losses have found their way into the playoffs.
-Since 1967, just two-percent of NFL squads who wear purple* have taken home a Vince Lombardi trophy. (*That would be Baltimore, buddy.)
-Brad Childress is your head coach.
-You have a grandpa taking snaps.
-You’re the Minnesota Vikings. Check your Super Bowl history.

After a very embarrassing start to the 2010 season, Vikings fans are doing more than just trying to get out of their Favre jerseys... some are trying to get out of the state.
Defections have been on the rise in Minnesota, so much so that Wisconsin legislators are considering approving a plan to build a border-wall to mitigate the flow of illegal Minnesotans from sneaking into the Badger State. According to Wisconsin state representative David Obey, this is the biggest border crossing problem he's seen since Minnesota first forced "that crappy watered-down ‘three-two’ beer on its residents."
Despite the sudden influx of aliens from the west, there are Cheeseheads that are somewhat sympathetic to the sudden influx of illegal immigrants; most saying they understand the lure of living in God's Country, the charm of cheese and the pride associated with being a Green Bay Packers fan. But some say if Minnesotans are serious about sneaking into Wisconsin, they should do their best to assimilate. "If you're gonna live here in America's Dairyland," stated Hank Bricko, a lifelong Hatley resident, "You should at least get to know the language and learn to speak 'Sconsin." 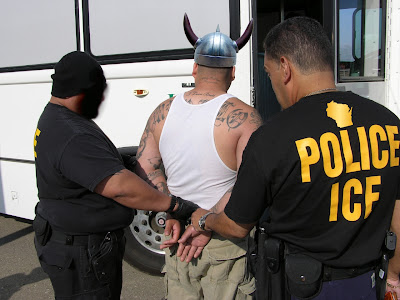 Here's a nice picture of the Wisconsin State ICE (Illegal Cheesehead Enforcement) Unit arresting an illegal Minnesotan shortly after he swam across the . He was apprehended outside of Buffalo Wild Wings in Hudson as he was attempting to catch the second half of last Sunday's Packers-Bills game.
But apparently it’s more than just swimming from Stillwater to Hudson to escape the Vikings, jucy lucy’s and Garrison Keillor. The PackerPage has recently uncovered news that there has been a substantial increase in the number of Minnesota women who have purposely crossed the border for the sole reason of giving birth in a Wisconsin hospital. That’s because they know you don’t just become a Packers fan, in Wisconsin you are born a Packers fan. This point was proven when state hospitals noted a substantial increase in newborn horn circumcisions.
In related news, the Wisconsin Department of Tourism announced their new marketing slogan for welcoming visitors entering the state from the south... "Don’t Illinois Me."
Posted by The PackerPage at 6:50 AM