(August 3, 2010) --- Brett Favre is retiring? Can it be?
Earlier today Favre sent text messages to teammates saying he plans to retire. Apparently the coach’s number must not be in Favre’s Blackberry.
"I'm not a big hearsay person," Vikings head coach Brad Childress said. "I've got to hear it from the horse's mouth." That’s when John Elway galloped in and confirmed the news.
Yes, after 19-years in the NFL, the old man is hanging up his cleats. But is he? 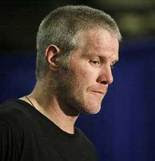 Recently Brett Favre admitted that he feels a little fatigued. He said he's mostly tired of reading all those stories about Brett Favre.
Instead of taking a loving look back at his long career, we decided to be the only reputable rag to do the complete opposite. After consulting our resident Psychic, Physiatrist and Psycho, the PackerPage has come up with a look into the NFL’s future regarding the one-and-only Brett Lorenzo Favre.
BRETT FAVRE TIMELINE
-August 3, 2010: Favre tearfully announces his retirement from the Minnesota Vikings and the NFL.

-August 4, 2010: The Chicago Bears announce that yesterday was the best day ever.

-August 7, 2010: The Vikings announce they will officially retire Favre’s purple #4 jersey during a lavish halftime tribute featuring local professional strippers, donkeys and midgets to be held during the Minnesota-Green Bay game at Mall of America Field in late November. 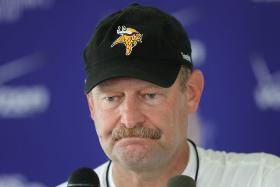 After Favre screwed over the Vikings, Childress wondered if he still had to wash Brett's cars.
-August 23, 2010: After media backs off its coverage of his retirement situation, Favre suddenly has a change-of-heart and informs the Vikings he wants to continue to play for the team this season.

-August 24, 2010: Vikings carefully inform Favre through a mediary that the team has already made their decision to move on without him and announce that they will go with a much younger prima-donna quarterback... Tarvaris Jackson.

-August 25, 2010: A pissed Favre throws a tantrum and demands an unconditional release from the Vikings to clear the way for him to play for another NFL team.

-August 28, 2010: The Vikings cancel Favre’s retirement ceremony and book a puppet show instead.

-August 30, 2010: Favre appears on the Cartoon Network program "Space Ghost Coast to Coast" where he expresses his frustration with Minnesota management, accuses them of being dishonest, and discloses that Brad Childress once wanted to run away with him and have his baby. 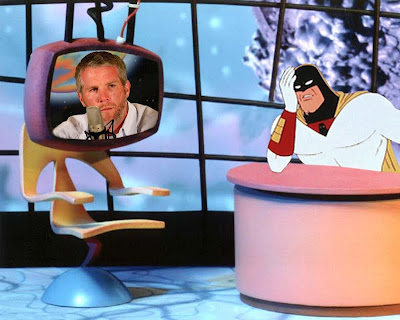 In an exclusive interview with Space Ghost, Favre discloses he's dealing with ankle, knee, foot, hip, and groin issues... but says his uvula has never felt better.
-September 1, 2010: The Vikings announce they have traded Favre out of the division to the Tampa Bay Buccaneers after convincing the Glazer Brothers he is extremely good at headers and bicycle-kicks.
-September 12, 2010: Favre completes his first pass as a Buccaneer, an amazing 43-yard toss to Cleveland Browns safety Raymond "Bubba" Ventrone.

-October 7, 2010: During the Buccaneers’ bye-week, Favre has a senior-moment and accidentally announces another retirement.

-October 28, 2010: Following three consecutive home-game blackouts, the Vikings announce to all Minnesota bandwagon fans that they will offer discounted prices to their annual "Sex Boat" cruises with every game ticket purchase.

-November 22, 2010: After a humiliating 62-3 loss to the Green Bay Packers in Minnesota, angry torch-welding Vikings fans – some carrying tar and feathers -- chase Childress out of town.

-November 23, 2010: Minnesota bribes Dennis Green back to the team as head coach of the Vikings with a lifetime complimentary pass to the all-you-can-eat dinner buffet at the St. Paul Ponderosa Steakhouse.

-January 3, 2011: After one mediocre 8-8 season with the Bucs, Brett Favre tearfully announces he will retire from football. 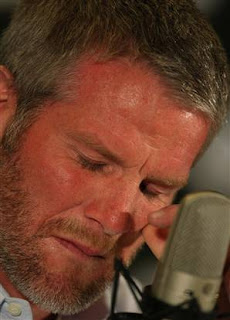 -March 3, 2011: The Vikings franchise announces it will be moving to Los Angeles.

-July 7, 2011: In the middle of a rambling press conference about the splotchy rash on his bum, his hypertension and a seemingly non-ending story about how dog-gone windy it was last week, Favre announces his return to football.

-August 2, 2011: Favre becomes the first known active player in the NFL to be a diaper-wearing grandfather.

-August 15, 2011: Favre signs as the new quarterback with the Detroit Lions for the sole purpose he can stick it to the Los Angeles Vikings.

-August 14, 2012: Favre signs as the new quarterback with the Chicago Bears for the sole purpose he can stick it to the Minnesota Lions.
Posted by The PackerPage at 1:13 AM