(August 15, 2010) --- Not only did Chicago come out on the losing end of a 25-10 pre-season squeaker to the San Diego Chargers on Saturday, they also managed to lose several players due to on-the-field boo-boos. Players who were hurt included safeties Craig Steltz (hambone) and Major Wright (goozle), linebacker Hunter Hillenmeyer (vulva) and quarterback Caleb Hanie (feelings) and few others on the Bears’ roster you’ve never heard of.
But one of their players has finally been taken off of that injured reserved list. Brian Urlacher is back on the field doing what he does best mediocre... pretending to be a linebacker for the Chicago Bears. 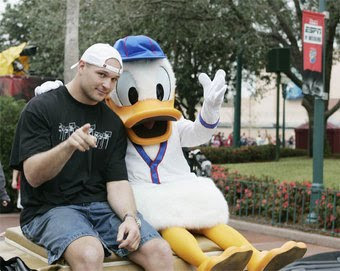 Here's a nice picture of Bears tackle Brian Urlacher spending some quality time with Chicago's new starting quarterback Jay Cutler who then turned to his right and said, “Bald, dumb and limp-wristed is no way to go through life, son.”
Urlacher, who was out most of last season due to a wrist injury, promised head coach Lovie Smith he will do his best to keep his arm healthy throughout the season even if it meant giving up internet porn.
“It’s still a little bit stiff and sore from all the abuse, and you can barely see the cuts and abrasions anymore,” stated Urlacher. “Oh, and my wrist is feeling better too.”
Urlacher assured thePackerPage.com he’ll be as productive and able as he used to be over a year ago and promised his fans he’ll continue to pile-on just split-seconds after a tackle is made in order to pad his stats. 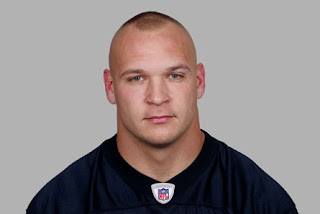 Recently Fox News propagandist Glenn Beck called Brian Urlacher a neo-Nazi which is absolutely not true. Instead, try neo-Nutsy.
Incidentally, following Detroit’s 23-7 pre-season loss to the Pittsburgh Steelers, Lions rookie defensive tackle Ndamukong Suh is expected to miss next week’s game against the Broncos. Not because he's injured, but because he just has better things to do.
Posted by The PackerPage at 6:22 AM