(June 2, 2010) --- The NFL season may be three-months away but the trash-talk is already underway.
New Orleans Saints safety Darren Sharper used his Twitter account to throw a jab at Brett Favre and a couple of his former Minnesota teammates. Shortly after the first shot was fired, Vikings tackle Bryant McKinnie and tight end Visanthe Shiancoe joined in the virtual fistacuffs. Apparently there's still some bad-blood between those sore-loser Vikings and Super Bowl champs the Saints. The Twitter tiff began earlier this week after 40-year old Favre announced he was having ankle surgery. On his ankle.
The PackerPage managed to obtain the entire never before seen Twitter conversation between the three NFL veterans and for the first time it is published here. 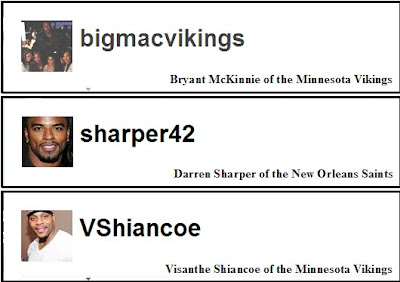 
@VShiancoe: "Sharper had surgery, too. And it was the knee. So if ‘X’ marks the spot on brett, I wonder what would mark the spot on sharper?"


@bigmacvikings: "Man u don’t want these preoblems. (The Vikings offensive line is) the secret service and Brett is Obama, so try to get thru if u want."


@sharper42: "haha. actually your line is the ford theater and favre is Lincoln. We'll watch part of your play & then were gonna put your leader down"


@bigmacvikings: "That's just plain dum. If ignorance is bliss, you must be the happiest person on earth."


@VShiancoe: "Yeah! What bigmac said! And darren why don't you slip into something more comfortable... like a coma."


@sharper42: "You know, I just heard you got a brain transplant... and the brain rejected you!"


@VShiancoe: "Well I heard that u went to a haunted house last Halloween & they offered you a job."


@VShiancoe: "hardee-har-har. well yo mama's so dumb she stared at the orange juice bottle cuz it said concentrate"


@VShiancoe: "Sharper, youre moma's so stupid she got locked up in a super market and starved!"


@sharper42: "stinkoe, yo mama is so fat that her cereal bowl comes with a lifeguard!"


@VShiancoe: "yo Mama so fat she went into a zoo & the zookeeper thought another elephant escaped!"


@sharper42: "well yo mama's so fat when she ordered a water bed they layed a blanket on the pacific ocean!"


@VShiancoe: "Yeah, i gotta go too. B-sides, 'secret life of an american teenager' is on soon. xoxo. see ya later." 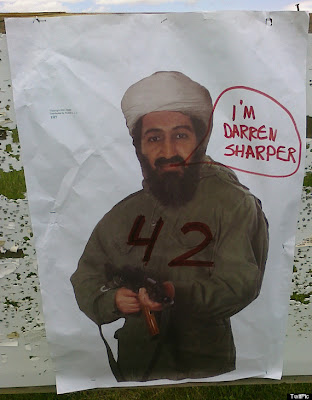 Some say it was extremely wrong of Visanthe Shiancoe to post this picture on his Twitter account and compare Darren Sharper to Osama bin Laden. We agree wholeheartedly. Osama is a much stronger link on defense in the secondary.
Posted by The PackerPage at 4:03 PM