(June 8, 2010) --- The Green Bay Packers released their annual list of approved baby names yesterday, a list many Packer Backer parents around the country look to when it comes time to christen their newborns.
The list, which has been generated by the Packers organization since the team won their first Super Bowl trophy in 1967, has long become a helpful guide for Packer Backer mommies and daddies everywhere. 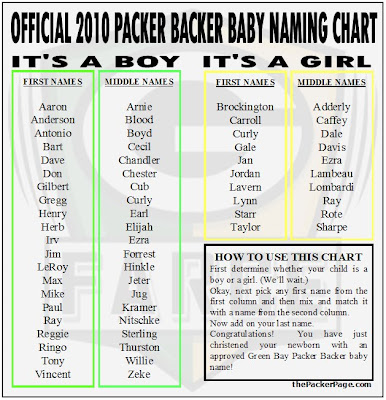 Got a brat in the oven? Well, here's the just released list of the Green Bay Packer approved baby names for the 2010 football season. Give our best to little LeRoy Hinkle!
“It's true what they say,” said Sherry Schuldes, manager of family programs for the Packers organization. “‘In Wisconsin you don't become a Packers fan, you're born a Packers fan’.”
Approximately 70,000 Packer fans are born in the state of Wisconsin each year and a good chunk of them carry names that were inspired by Packer players from the past and the present.
The majority of suggested monikers on the list are tied to Packer Hall of Famers such as Reggie White, Vince Lombardi and Tony Canadeo. "Names are added and subtracted from the list once every year," said Schuldes. "'Brett' for instance, which was on the top of the list for more than 15-years, was dropped like a hot potato in 2008." 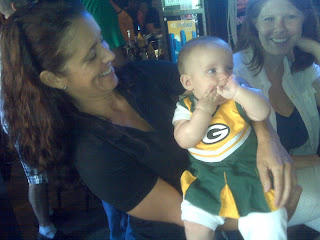 Here's a nice snapshot of little Taylor Ray and her mother who picked out her baby's name by using the handy "Packer Backer Baby Naming Chart." Her mother has just reported that her child is very smart and is already learning to speak. In fact she reported that her baby's first three words were "mama," "papa" and "Bears suck!" Now that's what we call Mensa material!
Aside from suggesting names, the Packers organization also assists parents with a variety of other helpful tips in regards to raising your brand new Green Bay boy or girl. For instance:

-Once the kid is officially christened, the very next thing Packer parents should do as-soon-as-possible is get that toddler's name on Green Bay's Lambeau Field season-ticket waiting list. The sooner you sign-up your baby, the better the chances of getting the child's great-great-great grandchildren permanent seats on those highly sought after metal bleachers. Incidentally, insiders tell the PackerPage that having a name such as "Max" or "Johnny Blood" will actually move you up their light-years-long waiting list.
-Stock up on those hard-to-find tiny jars of Johnsonville strained bratwurst. Strained sauerkraut and strained hot dog buns are also great toddler tailgate treats. Remember, there's nothing like a little brat for a little brat.
-Don't forget to purchase plenty of those disposable diapers with the Minnesota Vikings logo inside. As a parent you'll love seeing the satisfied face of your little Packer papoose at the exact moment he leaves a little gift for that team he'll soon love to hate.
-Never get a Titletown tot a cute and cuddly stuffed Bear. First of all, there's nothing cute and cuddly about the Bears. And besides, you don't want to traumatize the poor kid. Also, keep in mind that Wisconsin state law considers outfitting an infant in a Chicago Bears jersey or t-shirt as a blatant case of child-abuse.
-Other suggested gifts for the newborn Badger boy or girl include a miniature Lombardi fedora, a Lambeau Field stock certificate bib, a Colby cheese flavored nook or even one of those 12-tiered Green Bay Packers NFL Championship mobiles to hang above the crib.
-Finally, remember that “Green and Gold” is the new “Pink and Blue.” And that it’s never too early to buy a toddler its first cheese hat.

In related news, Packers head coach Mike McCarthy recently stopped into Green Bay’s WalMart just seconds before it closed to pick-up an outfit for his 20-month old daughter. But instead of playing it safe and picking up a onesie, McCarthy shocked everyone by calling an audible and going for a twosie instead.
Posted by The PackerPage at 4:03 PM