GOODELL PUBLICLY ADMITS: "I WISH IT WERE LONGER"

During the “corporate greed” portion of their meeting in New York last Wednesday, NFL and union officials seriously discussed the possibility of extending the regular-season from 16 games to a total of 18. If this were to happen the preseason would be condensed to just two games thus acutely reducing your chances of getting a ticket to Lambeau Field to see the Packers “play” from your only season ticket holder connection and least favorite relative, Uncle Romy.

NFL commissioner Roger Goodell said just about all team owners are on board for an expansion, except for the Detroit Lions who say they are currently content with the possibility of losing just 16 games per season rather than that of 18. 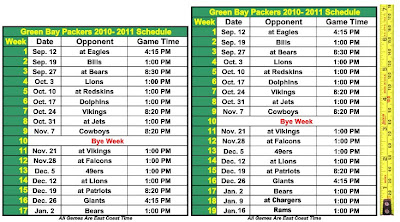 Before and after photos: The NFL schedule now, and what the NFL schedule would look like after the proposed lengthening. What do you think, ladies?
The 18 game regular season is far from a done-deal. Goodell said he must first check with Brett Favre to see if it’s okay with him. But even with Favre’s approval, Goodell said he would still need assurances that all team mascots would be available for those two extra games.

Incidentally, the Happy Schnapps Combo said if the season were to be lengthened to a total of 18 regular season match-ups next year, the power pop polka group said they would be forced to add an additional “really” to the chorus of their 1992 iconic classic hit single, “The Bears Still Suck Polka.”
Posted by The PackerPage at 4:00 PM