(May 18, 2010) --- Will Green Bay’s Greg Jennings go from Packer to actor? Hollywood insiders say the veteran wide receiver has been bitten badly by the acting bug.
Jennings made his network acting debut earlier this month as a lab technician on the CBS crime drama "Criminal Minds." He played his brief role so convincingly that several producers have sent Greg's agent a few television and movie script ideas in the hopes of luring the wide receiver off of the football field to instead in front of the cameras.
Over the past two weeks Jennings considered, but eventually turned down, the opportunity to portray Mama Malone, the oversized female prison warden in Tyler Perry's "Big Mama's Big House." Jennings also said "no" to becoming the main character on NBC's new "Will & Greg" an updated sitcom revolving around the wacky adventures of Greg Demmings, a straight Jewish man who runs his own interior design company and his best friend Will, a gay man and NFL agent and the hilarity that ensues. But after careful consideration Jennings signed-on with CBS and their "CSI" franchise in a new series to be aptly titled "CSI: Green Bay." 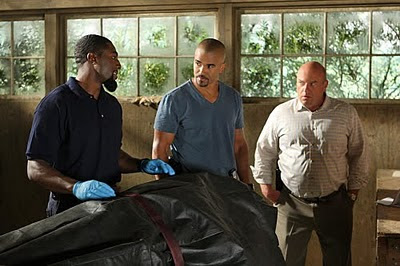 Jack “Bones” Friday: “He’s a Bears fan, he’s from Chicago, he’s a FIB and he’s in a body bag. Sometimes mysteries are best left unsolved.”
"CSI: Green Bay" follows the forensics team headed by Jennings' character Jack “Bones” Friday, the head of the Brown County Sheriff department's crime lab. Because of Green Bay's small population and low crime rate, writers had to adjust their CSI formula a bit to fit the city. For instance, in the opening sequence of the premiere episode, Jack and his detectives are called out to dissect a suspicious looking bratwurst found outside Curly's Pub at Lambeau Field to determine if it is a dangerous explosive device planted by Middle-Eastern football-hating terrorists or a tasty pre-game tailgate sausage produced by Johnsonville.
Another episode set to air in November is said to be topical in nature and deals with real-life issues people in the Dairyland struggle with each autumn. The drama is said to be centered around the days leading up to Thanksgiving in Wisconsin where the "CSI: Green Bay" forensic unit is busy performing autopsies on blaze orange-dressed white deer hunters and a number of dressed four-legged white-tailed hunted deer. Jennings’ character holds a press conference which divides Cheeseheads when he releases his scientific findings that claim "Deer hunting is dangerous to both overweight men who are smokers as well as non-smoking deer."
Jennings, who said he learned to act by watching Brett Favre's tearful press conferences, told the PackerPage he was most attracted to the show's production schedule and location because he would still be able to keep his weekend job scoring touchdowns for the Packers as the series would be filmed on-location in and around Green Bay.
Jennings also said Green Bay head coach Mike McCarthy seemed to be okay with Greg's second gig as an actor. In fact, McCarthy gave the go-ahead for Greg to promote the TV drama by wearing his white "CSI: Green Bay" lab-coat while sitting on the sidelines during all home games this season. Also, everyone attending the Packers' regular-season home opener against the Bills at Lambeau this September with get a complimentary replica Johnsonville "CSI: Green Bay" bratwurst time-bomb. (Batteries, gun-powder and sauerkraut not included.)
Posted by The PackerPage at 5:12 AM