(May 11, 2010) --- Veteran NFL waffler Brett Favre confirmed through his agent that he is still uncertain whether he'll hold a press conference to announce that he still hasn't yet decided to return to play football this season. Here’s a nice picture of Brett Favre at the moment he announced his retirement from the Minnesota Vikings during the 4th quarter of last season’s NFC Championship game.
Instead of consulting physicians when he injured his ankle way back last January, Brett delighted Vikings head coach Brad Childress by waiting until well after the NFL Draft before making any kind of decision regarding having his leg checked out by doctors. You might remember it was last season when Brett was diagnosed with "mini-campitis" which kept the QB away from the Vikings practice field up until the regular season began. Said Childress, "Brett can make his decision on his own time frame. But it certainly won't happen until I get all of his cars washed and waxed, his lawn re-sodded and finish painting and decorating Breleigh's bedroom in a 'Twilight' styled decor."
When asked what he thought about Favre's current state-of-mind regarding the Vikings, Green Bay Packers general manager Ted Thompson was quoted as saying, "Maahh-haa-ha-ha-ha... haaa-ha-ha-ha... haa-ha-ha... ha-ha ahh-ha, hmmm. Um... no comment."
In related news, the Cincinnati Bengals officially announced the signings of troubled free-agent convictback Adam "Pacman" Jones. The signing was immediately followed with a stern warning to Jones from the NFL announcing that they will strictly enforce their rigorous policy of “13 strikes and you're out.” 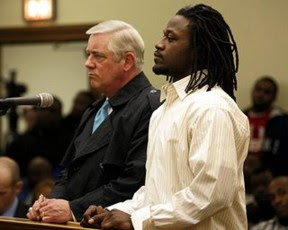 Meet Adam “Pacman” Jones, the Bengals latest addition. What, Rae Carruth wasn’t available?
Posted by The PackerPage at 4:50 AM