(April 27, 2010) --- Former Pittsburgh Steelers, Bears, Browns, Lions quarterback and Packers clipboard-holder Mike Tomczak was arrested Monday and charged with two counts of simple assault on his wife.
According to Bell Acres police chief Brian Brown, “Mike lunged at his wife, grabbed her and stepped on her foot."
Although he was arraigned by a judge and released on his own recognizance, Ed Hochuli still flagged Tomczak 15-yards for unnecessary roughness. 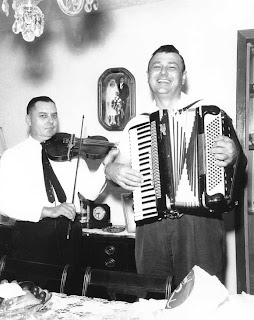 Since we wouldn’t want to purposely subject you to a picture of someone who used to wear a Bears jersey, we instead present a nice photo of polka king Mike Tomczak (with partner Sigmund Jozwiak) which was taken just moments before their performance of the “Hokey Pokey” at the 1964 Cigielski wedding.
Posted by The PackerPage at 4:46 AM