(April 23, 2010) --- “And with the 23rd pick in first round of the NFL Draft, the Green Bay Packers select... Bryan Bulaga!”
Aside from being big and knowing all about tackle... who is this guy?  Well, the PackerPage did a little digging and present to you this brief bio of the newest member of the Green Bay Packers 2010 roster. 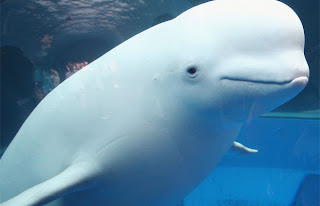 Here's a nice picture of the Packers' first-round draft pick relaxing at home in his pool.  Bulaga said that despite what most people assume, he is not a fan of the Miami Dolphins.

Bryan Bulaga was born in 1989 off of coastal Greece and raised in the temperate waters of Scandinavia while spending winters with his family near the coasts of Patagonia. While just a baby, his parents tagged him with the nickname “Piddlins.”

What initially interested Packers’ general manager Ted Thompson was Bulaga’s large forehead, a sign of high intelligence. In fact Bulaga’s I.Q. came in at 155, a level that would be considered near genius in most humans. Apparently, it must run in the family as Bryan’s uncle, Minsky Bulaga, beat Russian chess master Boris Spasky in a highly publicized chess match in 1979. And, Bryan’s father once helped with anti-mining operations in Arctic waters while working with the United States Navy.

When Bulaga was in a school, his friends said he was highly sociable and today he’s even known to Twitter at times... as well as Squeal, Cluck and Whistle.

Bryan told the PackerPage that his hobbies include swimming and says he is also very fond of dining on seafood. Bulaga stated, “My favorite meals include tuna, crab, shrimp, octopus and... (whispers) an occasional seal. Shhh!”

Bulaga admitted he was happy to be netted by the Packers having bought into the storied franchise “hook, line and sinker” long, long ago.

The Packers, who have yet to come even close to catching their limit, will be busy fishing for more talent when the 2010 NFL Draft continues this weekend.
Posted by The PackerPage at 5:35 AM