(March 21, 2010) --- With the NFL College Draft just a month away, Florida QB Tim Tebow has been in a hurry to adjust for the Big Leagues. NFL critics have long been saying that the former Heisman Trophy winner held the football too low, threw it too high and just looked way too darn pretty doing it. 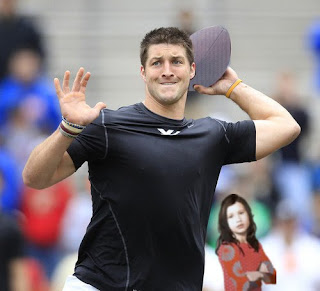 Closely watching her student is Tebow’s personal throwing coach; a little girl. “Dammit, Tebow! How many times do I have to freakin’ tell you! After you release the ball, extend that pinky finger!”
Instead of graduating and ascending directly into Heaven, Tim made the decision this year to make the transition into the NFL, and there are several teams in the league who want Tebow and God on their side this season and are keeping a very close eye on the 22-year old home-schooled Christ-child.

Said Tebow, “Ever since the news got out that I was learning how to throw one of those inflated oval leather things, I’ve been getting lots of unsolicited advice.”

For instance, Idaho senator Larry Craig stopped by to give Tim tips on a proper wide-stance. Chicago Bears center Francis Pertwee stressed the importance of making sure the ball is held snuggly and lovingly against the center’s crotch. And Brett Favre called Tebow to emphasize that whenever the football is thrown it’s important that he always try to do his utmost best to complete each and every pass... even if it’s to the other team.

“Just think about it,” said New York Giants coach Tom Coughlin. “Here we have a quarterback who is learning to throw a football just days before the NFL Draft.” He paused for a moment and then suddenly his eyes lit up. “He’ll most definitely go in the first-round. That boy’s blessed!”

In other NFL Draft news, hundreds of Packers fans are expected to hold a solemn candlelit vigil next month outside Lambeau Field on the 21st anniversary of the team’s first-round draft pick of Tony Mandarich.
Posted by The PackerPage at 4:45 PM