Chris Berman, longtime ESPN sports anchor and pun-machine, says his contract with the cable network expires this May and he just might not be "back-back-back-back-back!!!"

Because of his employment uncertainty, and to try to pay off the results of some of his bad "Swami" gambling picks over the years, "Bristolpher BerMAN-Boobs" is selling some of his "Bermanisms" to pick up some quick cash.

Recently, former Minnesota Twins pitcher Bert Blyleven dished-out $125 to retain the rights to "Bert Be-Home Blyleven." Up until last week, Berman was the only person in the free-world legally allowed to utter that phrase. 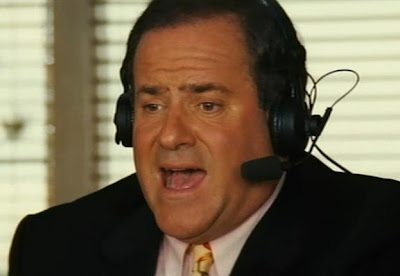 If Berman leaves ESPN, how in the hell are we supposed to differentiate between the New York football and New York baseball Giants?
Over his four-decades at ESPN, Berman has issued hundreds of copyright claims for stuff he made-up on his show like "Jake Daylight-Come-and-Me-Want-to Delhomme," "Scott Supercalifragilisticexpiali Brosius" and "Andre Bad-Moon Rison."

The dozen or so lawyers who have worked for the sportscaster over the years have constantly try to catch and sue anyone announcing, discussing or even whispering Bermanese without the expressed written consent of the National Chris Berman League which, of course, is strictly prohibited. But over the past several years, Berman's stock has fallen fast.

ESPN and millions of sports fans have long thought Berman has taken his word-play schtick and run it "back-back-back-back-back!!!" into the ground so deep that the value of those once treasured Bermanisms have tumbled quicker than "Rowland Flip Wolfe" in the 1932 Olympics.

Mark McGuire became the highest-bidder to the once popular "Sammy Say-it-Ain't Sosa" for a paltry 40-bucks and immediately buried it in an undisclosed location. Pete Rose purchased "Pete I-Never-Promised-You-A Rose Garden" and then promptly shoved it up Berman's ass. Other copyrights, such as "Jay Fiedler On-the-Roof" and "Tim Couch Potato," have long lapsed and are now public domain.

Still there are plenty of Bermanisms that either never caught-on or are now virtually worthless such as "Michael Who-Let-the-Dogs-Rot Vick," "Peyton Equals-2000-Pounds Manning" and "Brian Bald-Headed-No-Talent-Ass-Face Urlacher." The latter purchased jointly for just a buck by Wayne Larrivee and Larry McCarren.

Incidentally, this on-line news-site also got in on the act. Yesterday the PackerPage was the highest bidder ($15) on the Bermanism "back-back-back-back-back!!!" and is now contractually obligated to use it at least four times in each of the stories it releases on this website.