Ever since the Oakland Raiders head coach “accidentally” broke assistant coach Randy Hanson’s jaw during an altercation last August, news of other “fits of rage” have reared their fugly head.

Three women, including two former wives and a recent girlfriend, claim Coach Cable has a history of violent behavior toward women. To provide some perspective, a veteran Oakland Raiders tackling dummy told the PackerPage that even he was treated better. 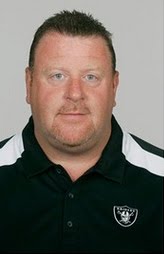 He looks like the kind of guy who lets his kids light fireworks with a cigarette.
The Napa County DA’s office explained that Cable merely “bumped” into Hanson's chair knocking him over and that's why he now talks out of his left ear. Apparently, the fist-imprint on Hanson’s chin was just a coincidence.
Please Al... disconnect the Cable. Go mireless.
(*crazy... ie: “F’ed Up.”)
Posted by The PackerPage at 1:55 PM