And keep in mind that all this didn’t occur in the first quarter, second quarter or even the third quarter... it happened in the hindquarter!

Last Sunday the Chicago Bears were more than a little behind. While trailing the Philadelphia Eagles with less than two-minutes left in the game, Bears veteran Devin Hester ran a slant pattern butt dropped more than just the football.

In an attempt to prevent Hester from catching the ball on a 3rd-and-one play, Eagles cornerback Dimitri Patterson horse-collared Hester about 20-inches too low and unintentionally de-pantsed da-Bears receiver exposing his backside on national TV. 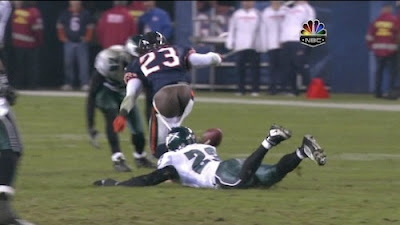 The PackerPage apologizes in advance for posting this offensive picture of someone wearing a Chicago Bears jersey.
And we thought Jay Cutler was the big ass in Chicago.

Seeing Hester’s hiney apparently didn’t inspire his teammates as Cutler threw an interception a couple of plays later effectively canning the game for the Bears.

In the end there was a bit good news-bad news regarding a certain Bears’ booty. The good news is Devin picked up an endorsement deal with Heineken... the bad news is that he was fined after Roger Goodell heard about Hester’s crack on the field.

In related news, Brian Urlacher shaved his legs and wrecked ‘em.
Posted by The PackerPage at 10:13 AM