HAPPY HALLOWEEN FROM THE PACKERPAGE! 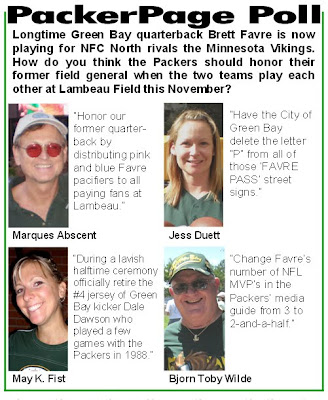 FIND A CURE... PUNT THE PURPLE!

As you know, the Packers have pioneered the use of specially-colored baseball caps to raise funds for team charities, beginning with the original pink “Breast Cancer Awareness” cap and followed in succession by the red “Heart Disease” cap, the stonewashed black “Support Our Troops” military cap and the popular hunter-orange “Hunger Awareness” cap.

Reliable sources have told the PackerPage that this month’s hat will be a light violet twill cap designed to promote awareness of a recently-discovered disorder known colloquially as “Brett Cancer,” a disorder that cripples one’s sense of loyalty and self-esteem and hampers one’s ability to make decisions and stand by them. All proceeds from sales of the “Brett Cancer Awareness” caps will be split between the Charlie Brown Memorial Home for the Wishy-Washy in St. Paul and the Hennepin County Center for the Morally Impaired. 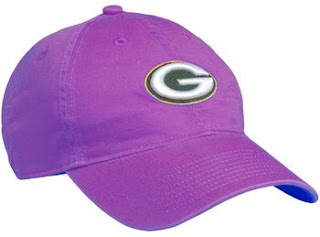 Purple... to match Brett's face after the Vikings choke later in the season.
In related news, the Detroit Lions announced they will soon be selling their own fundraising headwear: a royal-blue “Grandiose Delusional Dementia Awareness” stocking-cap. It’s made of 100-percent wool, features the Super Bowl logo, and has enough material to easily be pulled over the eyes.
-Packer Dave Mitchell (#1165)
Posted by The PackerPage at 5:40 PM 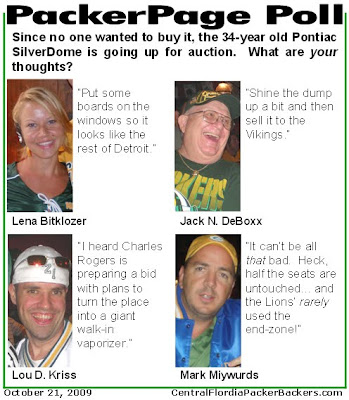 Posted by The PackerPage at 2:35 PM 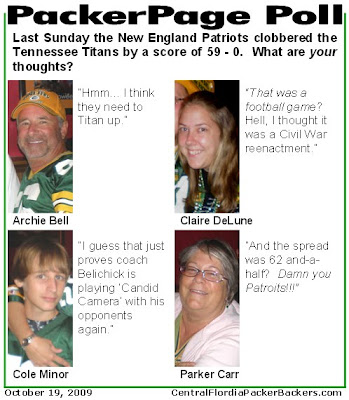 Posted by The PackerPage at 4:19 PM

(October 13, 2009) --- The NFL just announced that the Green Bay-Minnesota rematch set for Sunday, November 1st has been moved from a 1pm (ET) kickoff to a 4pm start because the FOX TV network realized they have an opportunity to make a lot more moolah.

The Philadelphia Phillies are in the National League Championship and if they win that series, the Phillies will host Game-4 of the World Series at 7pm on November 1st. So, to avoid a cluster-Philly, the NFL and FOX decided to flip-flop the Vikings at Packers and Giants at Eagles games that same day. 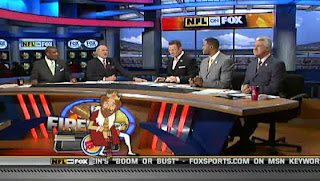 AFL THROWBACKS: THROW THEM BACK!

In an effort to embarrass almost half the players in the league, the AFL has been celebrating their 50th anniversary by forcing some of the teams to occasionally don retro-jerseys. Some may have looked kinda okay... but you’d have to admit that others were more throw-up than throwback. Think about it: How would you feel if you were told you had to go to work the next day wearing what your father wore in 1962. Unless your dad looked and dressed just like Don Draper, you’d “haaaate-it!!!” 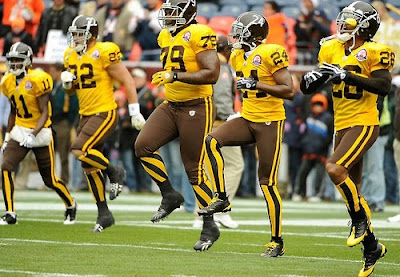 Retro Broncos: Looks sort of like somebody had diarrhea after a corn-eating contest. (Sorry.)
Now usually when you see something yellow and brown you have an urge to flush. Well, the poor Denver Broncos didn’t have that option. The garish pee and poop color-combo they wore on the field last Sunday had many a Denver Bronco football fan wishing for the good ole' days of black & white television. But when you consider the fact the Broncos are 5-0 so far this season, well, it just proves that it's hard to play against a team... when you're laughing so damn hard!
The American Football League, which merged with the NFL in 1970, played its first season in 1960 with eight teams... all of which recently dug deep into their closets for those crazy costumes of football past.
They include the Buffalo Bills (featuring the logo of a silhouetted blood-red buffalo... allegedly slaughtered by O.J.); the San Diego Chargers (with a pair of bolts near their dolts); the Kansas City-Dallas Texan-Chiefs (and the silhouetted logo of the Lone Star State which just confuses the already intoxicated football fans of Missouri); the Boston-New England Patriots (...but wasn’t Paul Revere & his Raiders originally from Idaho?); the Oakland Raiders (“...it's like, how much more black could this be? ...and the answer is, ‘none’.”); the Tennessee-Houston Oiler Titans (with an image of an oil derrick... how crude!); the Titans of New York Jets (“T - I - T - S... tits, tits, tits!”); and the afore mentioned Denver Broncos (wearing helmets that look like the players have brown bowling balls on their shoulders). 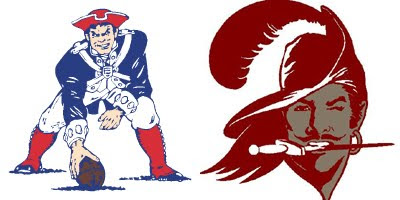 Little known AFL fact: Patriot Pat and Bucco Bruce were once "life partners."
Incidentally, the Tampa Bay Buccaneers... who first joined the league as an AFL team 33-years ago... is also getting in on the retro-football festivities. But instead of dressing like they did in 1976, the Bucs decided to play like they did in 1976.
Posted by The PackerPage at 12:29 AM

(October 10, 2009) --- A couple of weeks ago Packer Brian (#777), (one of our CFPB head-cheeses), invited artist, illustrator and journalist Thomas Thorspecken to stop by our clubhouse to check out our very animated group of Packer Backers at One Eyed Jack's in downtown Orlando. Brian had heard of Thorspecken's work through his on-line blogsite and was so impressed he invited (translation: bribed him with beer) the talented artist to check out our club and hopefully put us to paint. Well he did... and after a couple Miller Lites and using up all of his green and gold colors, Thomas came up with something very frameable. 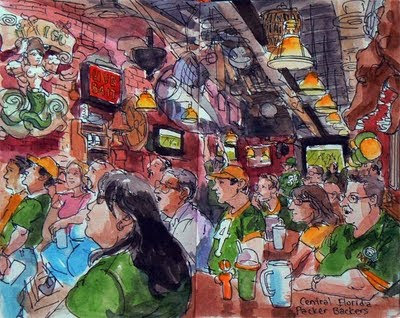 Just a few of the Picasso Pusses in the Central Florida Packer Backers club that were captured by Mr. Thornspecken's brush.
You see, since the beginning of this year, Thorspecken has been posting an impressive sketch-a-day on his website documenting the people and culture of the city of Orlando. And since he actually did stop by (during the Packers-Bengals game on September 20th) to sketch the friendly beer-swilling green-and-gold-wearing polka-party-people of the Central Florida Packer Backers, I just guess that means we have culture too! Now that's good to know!

And hey, Picasso puss... look closely at his very colorful CFPB sketch! You never know... he just may have accidentally sketched your fugly mugly! So when you have a moment, please check out Mr. Thorspecken's blogsite, it really is pretty cool... and leave a nice comment if you wish.

BTW... who's the dude in the Favre jersey? Hmmm... must not have gotten the memo.
Posted by The PackerPage at 1:36 AM

WE'RE GOIN' UP NORTH TO PUT THE WORD TO THE STREETS!

(October 8, 2009) --- Dressed like Hasidic Diamond merchants, Packers offensive coordinator Joe “Jake” Philbin and offensive line coach James “Elwood” Campen recently walked into Kroll’s (Green Bay’s closest thing to a soul food restaurant) and ordered 4 whole butter burgers, dry white toast... and a Coke. They may have looked like they were with the FBI, but they’re not the police… they’re bruisicians.

You see, the Bruise Brothers are on a mission. A mission to put their offensive line back together. A mission from St. Vince. 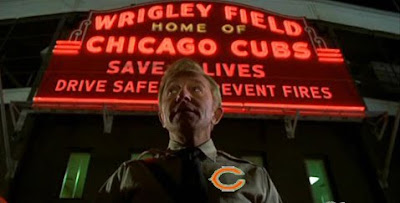 Cheeseheads: "We hate Illinois Nazis."
They already got Dapper Daryn Colledge and Jivin’ Jason Spitz… but the Bruise Brothers are on a mission to seal up the GB O-Line by reuniting Marvelous Mark Tauscher and Charming Chad Clifton to back-up and cover Amazing Aaron Rodgers just in time to play the Detroit Good Ole Boys.
So, don’t miss the return of the Bruise Brothers and their “Mayhem and Bruise Review...” Sunday, October 18th at the Lambeau Palladium.
Our Lady of Blessed Dispelleration, don't fail us now!
Posted by The PackerPage at 10:27 AM 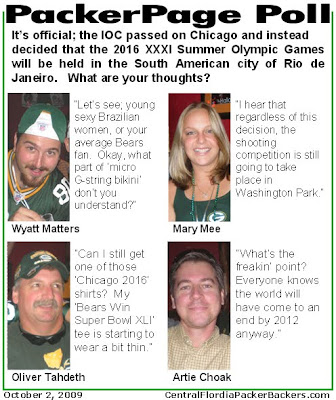 Posted by The PackerPage at 2:47 AM

YOU BRETT WE'LL BE AARON IT OUT!

(October 2, 2009) --- The countdown is on! Just three days until Aaron Rodgers takes on Brent Favre in Minnesoso. It should be an exciting game no matter what the outcome (ie: Packers by 30 or Packers by just 1)! And while you’re watching the action (hopefully with the rest of the Packer Party Crew at One Eyed Jack’s in downtown Orlando) expect one record to be shattered on Monday night: the total number of times Favre’s name is mentioned during a football telecast. So much so John Madden will have wished that he unretired too! And for those who have prior commitments and will not be able to see this highly touted Packers game, here’s what you should be hearing on the Vikings Sports Radio Network come Monday night :

-(First quarter, following the first Favre-thrown interception of the game) “Well, he used to play for Green Bay... you know, I’m sure it must have been a slip of the ol’ memory there.”

-(Second quarter, after Favre’s second interception) “Man, he must have had a flashback and thought he was throwing to Donald Driver.”

-(Third quarter, when Favre tosses away another one) “You know, he’s just like a kid out there, trying to make everyone on both sides feel like a winner. Whadda great guy!”

-(Final quarter, just after Favre’s fourth pick) “Ah dammit... why did we sign that guy again?”