(September 20, 2009) --- Just after Tony Romo got picked off for a touchdown, Dallas Cowboys owner Jerry Jones got caught on camera doing some picking of his own. Picking your nose is so much more satisfying when you’re doing it in your brand new $1.1 billion stadium. The camera cut away after the lengthy clip of Jerry digging for gold, but presumably the result was then either flicked on a Texas taxpayer down below or put in his pocket for use in his next plastic surgery. 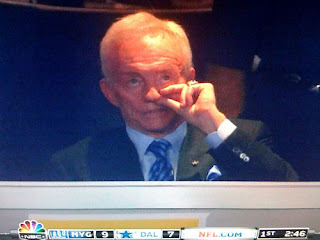 Because a picture is worth a thousand absurds, we couldn't just pick one great caption. So we're giving you a choice. Go ahead! Choose your caption! If you have a better one, e-mail it to us (through the link at the bottom of this page).

A... Hey, you never know where you might find oil in Texas.
B... Looks like it turned out this was the only winner Jerry picked this week.
C... Five bucks says he eats it.
D... I guess the Cowboys owner didn't want to blow it.
E... Despite building a beautiful brand new one-billion dollar stadium, Dallas Cowboys owner Jerry Jones still nose how to put the “ass” in “classy."

Posted by The PackerPage at 3:48 AM