(August 11, 2009) --- Happy anniversary you Green Bay Packers! And can you believe it?... the senior franchise in the NFL turns an amazing 90 years young today.

To mark the special day, lots of activities were planned at legendary Lambeau Field and fans all over the state made the trip to celebrate the leagues oldest team in the National Football League with plenty of “family friendly” events. For instance, parents who wanted to take part in an all-you-can-drink beer sampling event at Curly’s Pub called the “Blatz Blitz” had the option of dumping their kids off at the “Brats for Brats” booth at Clarke Hinkle Field which featured lots of yummy Johnsonville pacifiers to help silence the sobbing. 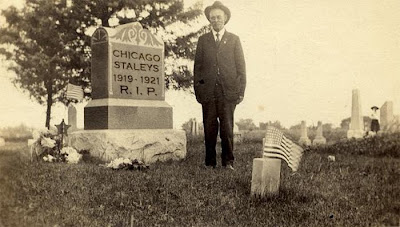 There were the usual historical presentations such as classic photographs, team memorabilia and George Halas’s vintage negligee collection... but most Packer fans were lining up to for several interactive displays honoring a few Green Bay greats. The longest line was just outside the Packers Hall-of-Fame to take part in the “Ray Nitschke Experience” where unsuspecting fans were handed a football only to get a spring-loaded forearm to the head. Another popular exhibit was the “Paul Hornung Challenge” where Packer Backers could wager how many shots of whiskey they could down and still put a football through the uprights.

To help celebrate the date, team founder Earl “Curly” Lambeau and a few other surviving members of the Green Bay Packers’ 1919 squad (10-1) met at the field that bears his name for photos, autographs and carbon-dating. Fans were delighted to watch 111-year old Lambeau and 112-year old teammate Nate Abrams reenact one of the plays from the Packers' inaugral season when... while on their way to clobbering Sheboygan 87-0... Abrams ran 96-yards for a touchdown. You still have a chance to catch this historical moment as Abrams isn’t estimated to reach the end-zone until sometime in early September.
Posted by The PackerPage at 11:33 AM